Fighting Alzheimer’s disease and dementia together 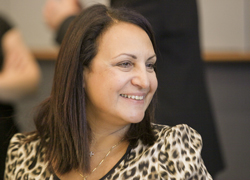 Our member Alzheimer Europe met with MEPs and Commission officials on 1 April 2014 to discuss the growing threat of Alzheimer’s and other dementia-related conditions. The conference was hosted by MEP Marina Yannakoudakis (ECR, UK) who is also vice-president of the European Alzheimer’s Alliance (pictured, EP credits).

Last year it was estimated around 8.7 million people suffer from dementia in Europe. This number is expected to double by 2050. With ageing populations across Europe, the need to find a treatment or cure for dementia has become critical.

Executive Director Jean Georges said “not only do we need research into a cure for Alzheimer’s disease to give hope to future generations, but we need to find concrete solutions and approaches for the million Europeans living with dementia today.”

MEP Marina Yannakoudakis said “it is vital we ensure Alzheimer remains a top priority in the next parliamentary term- we must also ensure the new Commission Presidency places this issue at the top of its agenda. This problem is getting worse, there is still so much more research to do and Member States need to ensure they have effective strategies in place for dealing with dementia”.