Legislation summary - How is discrimination addressed in EU legislation?

Article 19 of the Treaty on the Functioning of the European Union provides the legal basis to take action to combat discrimination on six grounds (sex, racial or ethnic origin, religion or belief, disability, age, or sexual orientation). The Charter of Fundamental Rights of the European Union prohibits discrimination on these six grounds and nationality (Article 21).

To combat direct and indirect discriminations, the EU has adopted a legislative framework to implement the principle of equal treatment between persons. This principle requires that all people have the right to receive the same treatment and are not discriminated against. 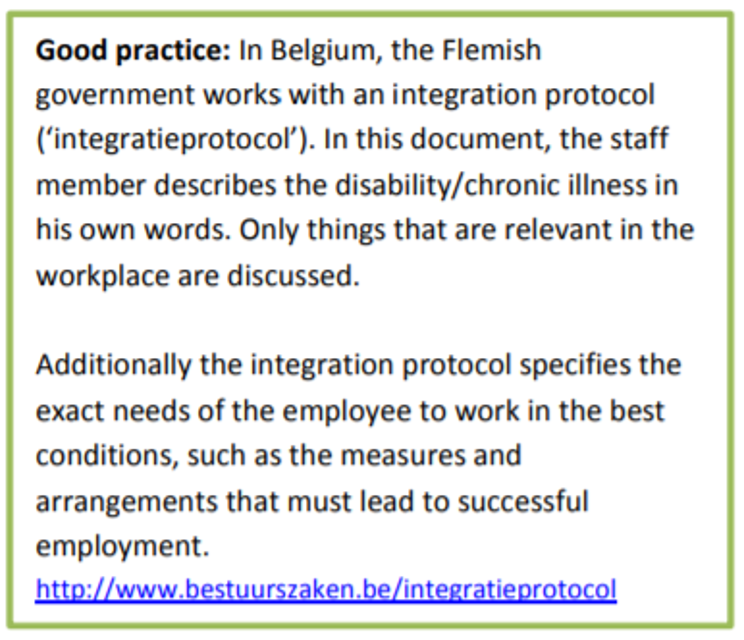 In particular, the Council Directive 2000/78/ECof 27 November 2000 establishes a general framework for equal treatment in employment and occupation (‘Employment Equality Framework Directive’), and addresses discrimination on grounds of disability. National transposition measures communicated by the Member States concerning this Directive can be found here.

Article 5 of the Employment Equality Framework Directive specifies that employers shall take appropriate measures where needed in a particular case, to enable a person with a disability to have access to, participate in, advance in employment, or to undergo training.

PEOPLE WITH CHRONIC CONDITIONS AND THE EU EQUAL TREATMENT LEGISLATION

A key question for patients is whether or not they are in the scope of the EU legislation on discrimination, as people with chronic conditions are not currently protected on the ground of health status. This currently depends on the definition used by their Member State’s law for disability, as the concept of disability does not have a common definition at EU level. 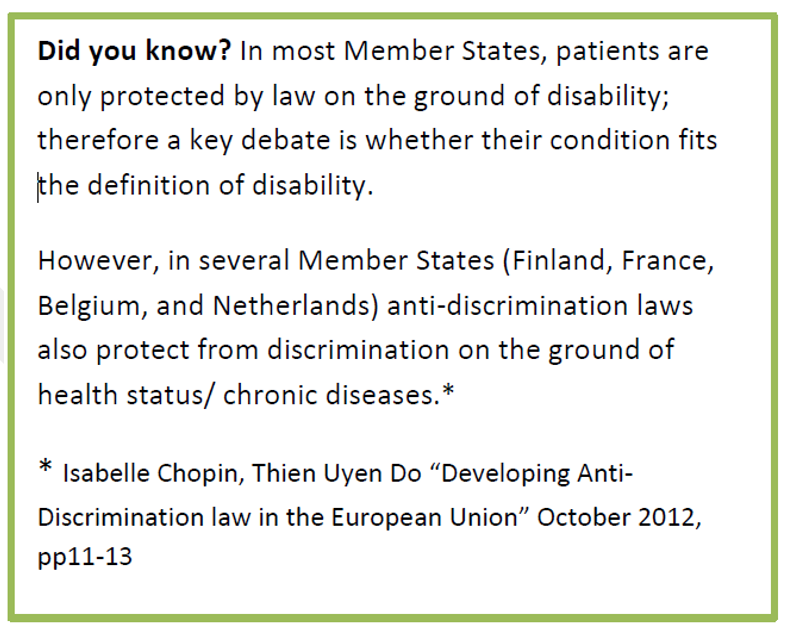 These vary from very restrictive definitions, in which only a group of “truly disabled people” (according to definitions of social security law) is protected, to definitions where patients can be included if they have an “impairment” which is considered to have an impact important enough on their life, to yet a broader definition (used in Ireland) in which patients can always be included. Inclusion or exclusion within this concept also depends on the patient’s type of disease.

The EU programme “Rights, Equality and Citizenship 2014-2020” aims at promoting non-discrimination through funding various types of activities, including training activities and research.

RIGHTS OF PEOPLE WITH CHRONIC CONDITIONS AT WORK

The lack of clear structure and rights encountered by people with chronic conditions in various situations could be considered an indirect structural form of discrimination. For example, it is unclear whether they are protected when they risk losing their job due to repeated or long-term absence.

Actions to raise awareness within companies or trade unions and for the general public could contribute significantly to tackling this problem.

A critical situation is when patients are diagnosed as being terminally ill. A recent “Dying to work” campaign uncovered that terminally ill patients are inadequately protected by UK legislation in this situation. As a result, patients have to undergo stressful human resource procedures, financial difficulties, and anxiety resulting from the loss of employment.

Long-term and chronic conditions are sometimes caused by work itself. When work is the main cause of a condition, it is classified as an occupational disease (e.g. some substances present or manipulated at work can cause allergies, respiratory diseases, cancer). When work is one of several factors causing an illness, it is classified as work-related disease. In this case, the EU and Member States have specific policies in place, called occupational health and safety policies.

Other sections on this topic:

Working with a chronic condition

Guides and tools developed by patient organisations (for employers and patients)