A new model for working with Medical Societies 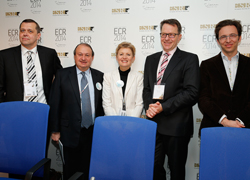 The 2014 European Congress of Radiology took place on 6-10 March in Vienna, Austria, and marked the first time that patient representatives were actively involved. Over the last year, EPF has developed a strong cooperation with the European Society of Radiology (ESR) and we are now chairing a newly - established advisory body within the Society, called the Patient Advisory Group on Medical Imaging, PAGMI.

During the Congress, Nicola Bedlington spoke about risks and benefits of communication from a patient’s perspective. Eric Briers, from EuropaUomo, presented issues such as patient-centred radiology and economics and the interactions between patients and radiologists through social media. Ms. Bedlington was also involved in the launch of ESR’s EuroSafe Imaging Campaign.

EPF is delighted that ESR is officially supporting the EPF EP election campaign. Nicola had the opportunity to present the campaign at the Congress Press Conference and Professor Guy Frija, former ESR President commented: “We believe that this holistic approach is an important step towards joining forces for patient safety in Europe."

Plans are under way for special sessions in next year’s Congress on patient - doctor communication and health literacy, and delivering patient- centred care, which the patient advisory group will lead.

The Patient Advisory Group on Medical Imaging (PAGMI) was launched at the European Congress of Radiology in 2013. The objectives are: to improve dialogue and knowledge-sharing with the  patients’ community; to involve patient representatives in strategic decisions regarding medical imaging; to liaise with patient groups on policy issues of common interest; and to ensure that a patient-centred approach is embedded in all the work of ESR.

Nicola chairs the group which currently involves patient leaders from the areas of neurology, cancer, and crone’s and colitis, and key leaders from ESR and the European Federation of Radiographers. The Group is open to more patient representatives and EPF members who are interested are invited to contact Nicola for more information.

A key goal of the group is to improve the ESR patient information website to ensure that it is as accessible and as user-friendly as possible for the patient community throughout Europe, with links to relevant national sites. This is still work in progress and the intention is to set up a focus group of patient representatives to advance the work during 2014.

Patient involvement in other ESR activities

Patient groups also now contribute actively to the International Day of Radiology. In November 2013 the focus was on the lung, and a book was launched on thoracic imaging including interviews with patient representatives from the European Federation of Allergies and Airways Diseases Associations (EFA). The theme of the 2014 International Day will be the brain, on the suggestion of the European Federation of Neurological Associations (EFNA), EPF Member, through the Patient Advisory Group.

In October 2013 ESR organised a roundtable discussion in the European Parliament in Brussels on “The role of medical imaging in personalised medicine: How to deliver the right treatment to the right patient at the right time”. We will continue to explore policy topics of common interest, the Alliance for MRI serving as a good example of effective cooperation in the policy arena.

The ESR Patient Advisory Group has also initiated work with the ESR Audit and Standards Committee specifically on developing a project on delivering outstanding patient and family centred care in the sphere of radiology, which will then be endorsed by the Society.

A driver diagram will be developed by the Patient Advisory Group which will then form the basis of standards of best practice and an audit programme will be devised to aid services in improving care, drawing on identified examples of best practice from member societies and the patient community.

EPF is reviewing cooperation with the ESR as a potential model for our relationship with other non- diseases specific medical societies and associations, as part of our commitment to collaboration with fellow health stakeholders.