A patient journey through Europe 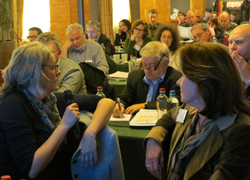 With the Cross-border Healthcare Directive, the rules on patient access to healthcare have been clarified and are now in force. However, much work still remains to be done, especially to inform patients of their rights and to explain what is covered and how they might go about exercising their rights. EPF organised the first conference on this Directive in December, which Dr. Cees Smit, policy advisor of EGAN, has reported on our blog.  EPF is preparing the second regional conference that will take place on 7-9 April in Athens, Greece, under the auspices of the Greek Presidency of the Council of the European Union.

EPF organised a first conference on this Directive on 9-11 December 2013 in Brussels aimed at patient leaders from the five participating countries – Belgium, Luxembourg, The Netherlands, France and Germany – who have the capacity to transfer learning and knowledge from the conference to peers within their organisations and networks.

Dr. Cees Smit, policy advisor of EGAN, reports from this first conference on our blog (link). He says: “First of all, [Patient Organisations] act as a key person from the patient community in their own home-country in the further communication and cooperation with other stakeholders in this directive. And second, that they cooperate with EPF in the future in the further evaluation process of how the directive works in practice.”

This conference is the first in a series of regional conferences for patient communities on the cross-border healthcare Directive. EPF will organise the second regional conference on 7-9 April in Athens, Greece, under the auspices of the Greek Presidency of the Council of the European Union.

This event is open to registrations of patient organisations’ representatives from Greece, Malta, Cyprus and Italy. Further conferences will be organised in 2014 in other EU countries.

You can register until 1 April 2014 and for more information, please visit our event section or contact Véronique Tarasovici at veronique.tarasovici@eu-patient.eu or +32 (0) 2 280 23 34.