EUPATI: your health, your knowledge 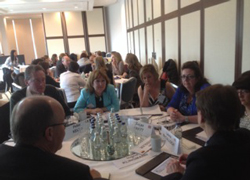 More than 150 representatives from patients’ organisations, industry, academia and the world of regulation met in Warsaw on 2-3 April 2014 to plan the next stage of our patient-led Academy, EUPATI. At the heart of the discussions: how to reach at least 100,000 European citizens with an interest in health?

EUPATI stands for 'European Patients Academy on Therapeutic Innovation'. The two-day project’s workshop focused on how to equip European citizens interested in health with information and tools to understand how the development process works – and perhaps motivate them to become more involved in it.

Anna Zawada, from Poland's Agency for Health Technology Assessment, said that while patient involvement is written into their operating principles, it can be hard to find patients with sufficient expertise and confidence to fill the roles assigned to them.
Bella Starling from the University of Manchester revealed – perhaps predictably – low levels of knowledge of medicines development across Europe, including about how patients can contribute to the process. But there is also considerable public interest in the area, though accompanied by a lack of trust in the authorities and the industry in some countries.
Regarding messaging to the general public, the four most popular messages that EUPATI will now work on are:

At the National Teams meeting the following day, representatives also talked about supporting these teams. It would allow them to meet more frequently, discuss local plans of implementation, and share some successful models of National Teams such as in Italy and the UK that might be used in other countries.

Another lynchpin of the plan to engage a hundred thousand Europeans will be EUPATI's new Internet Library. Project director Jan Geissler explained that this will come online towards the end of 2015, and will be available in seven European languages – English, French, Spanish, Italian, German, Polish and Russian.