What is to be a patient today in Europe? 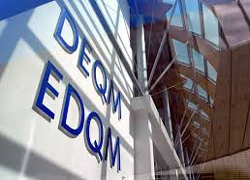 In 2014, the European Pharmacopoeia and its secretariat, provided by the European Directorate for the Quality of Medicines and Health Care (EDQM), celebrate 50 years. EPF took the occasion of this celebration to bring our patients’ campaign for the 2014 EU Elections to the Council of Europe on 11 March 2014 in Strasbourg, France.

To mark the occasion of its 50th anniversary, EDQM organised a workshop on "Public health, medicines and the protection of patients" for media representatives present. EPF Communication Officer Cynthia Bonsignore outlined to journalists what is important to patients today in Europe in terms of quality of care and access to healthcare.

“Every five years we, as European voters, get the opportunity to have a say on what is important to us with the European Elections. This campaign is our chance to encourage politicians and policy-makers to commit to a healthier Europe where patients are part of the solution in making health systems more effective and quality-oriented” she said.

In 1964 an international treaty was adopted by the Council of Europe (Strasbourg, France) to provide for the development of a European Pharmacopoeia. Today, throughout Europe, from a simple paracetamol tablet to the most sophisticated treatment, all medicines manufactured and sold are subject to strict quality standards that are part of the requirements for marketing authorisation.

As part of the celebration of the 50th anniversary of the EDQM, the Council of Europe is organising a series of workshops for invited members of the media only (in March, April and November) and meetings with the public (April and May) in France, Austria and Belgium. The aim is to promote better understanding of the value of these European programmes co-ordinated by the EDQM from Strasbourg.

The highlight will be an international scientific conference, to be held from 6-8 October 2014, for professionals involved in the manufacture and control of medicines from all over the world.

More information is available on the Internet site of the EDQM: www.edqm.eu