The EPF Manifesto has received the support of more than 700 signers!  Of these, 255 have made a non-anonymous declaration of their support by signing our online manifesto and are listed below.

Members of the European Parliament

34 MEPs have already committed to including a patients’ perspective in their work in the coming mandate.  All MEP supporters are listed below.

“The demographic developments in our society--with the increasing life expectancy, the growing number of older persons and reducing number of young people due to the reduction of birth rates--are the key challenges of our society. All this has become the object for the discussion in politics on political levels.  That is why I find this manifesto a very, very worthy and helpful tool to foster the future challenges in the successful way.” –MEP Becker

“I decided to support the [EPF 2014 Elections] campaign because, increasingly in terms of healthcare policy, we are hearing about the need for people to take responsibility for their healthcare.  We‘re hearing concerns about people who are not compliant with their medication or their healthcare regime, and you begin to feel that all of this is telling people what they should be doing... Where is the voice of the people who are also engaged in this proccess? Patients are not passive individuals to whom things happen; they‘re active people.  They are people who are actively—should be actively—engaged within determining their own healthcare.“ –MEP Lambert

"Creating a healthier Europe for all citizens remains a fundamental goal. It can be achieved through a combination of European and national policies. These policies must preserve the European social model by counteracting austerity-only policies that threaten national health budgets. At the same time, they must encourage Member States to use instruments at EU level such as the Health Programme and the Horizon 2020 so as to increase investments in research and innovation. I also want to engage patient organisations in the policy-making process through a transparent and comprehensive framework that will allow for better designed and more efficient health policies that adequately address current challenges." MEP Martin Schulz

All Supporters of EPF Campaign

The Directorate-General for Health and Consumers (DG SANCO) is responsible for the implementation of EU laws on the protection of people’s health.  As of 15 May, 2014, the 2014 Elections Campaign received the support of 6 members of DG SANCO. 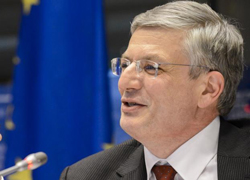 "I fully agree with you that patients' views matter and that empowered patient are an asset for the economy. Indeed patient empowerment contributes to the success of healthcare systems. (…) However, there is still no consensus among Member States on the advantages of, and barriers to, patient empowerment."

EPF is proud to engage in partnership with a diverse number of stakeholders in EU health.  As of 14 May, 2014, 22 health stakeholders expressed their support for EPF’s 2014 Elections Manifesto.