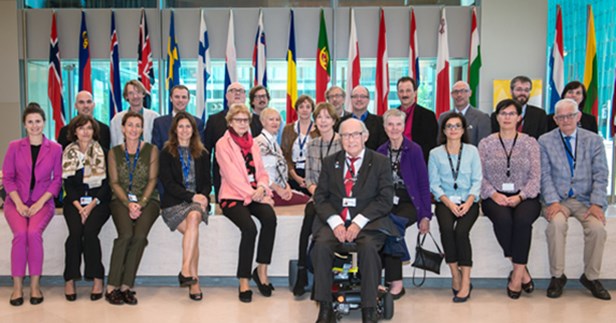 The year 2016 marks the 10th anniversary of the Patient and Consumer Working Party (PCWP) at the European Medicines Agency (EMA). The PCWP was formalised in 2006, built on a working group of patients' organisations created in 2003. EPF has been represented on the PCWP since 2008.

The PCWP is a unique platform for exchange and dialogue with patients and consumers’ organisations on all issues related to medicines. These days, the PCWP regularly holds joint meetings with the Healthcare Professionals’ Working Party in recognition of the importance of close collaboration between patients and professionals at the regulatory level.

A special anniversary meeting on 14 June, combined with the working meeting of the PCWP, provided an opportunity for reflections on the past as well as a forward look. In the past 10 years, patient involvement at the EMA has become mainstreamed; today patients’ preferences and values are well integrated in the scientific reviews through participation in Committees and Scientific Advisory Groups (see overview image, below). From 2014, a pilot is ongoing with patients involved in oral explanations at the Committee for Human Medicinal Products – the committee that makes the recommendations to the European Commission regarding marketing authorisations. 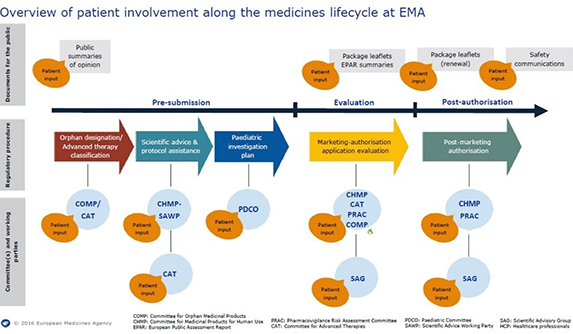 As the 2015 annual report on these interactions states, the question is no longer how to involve patients but how best to support their involvement and increase the recognition of their contribution.

The EMA’s approach generally has also matured, with increasing transparency and a shift “from informing civil society, to involving and subsequently engaging with civil society” as EMA Deputy Executive Director Noel Wathion put it at the meeting.

Last year, 5 special topic groups were launched within the PCWP, which are aiming to make visible the added value of patient involvement for regulators but also for the patient communities, explore future training needs and use of social media as well as involvement of young people.

Susanna Palkonen, EPF Board Member, who has represented EPF on the PCWP since 2009, said: “EMA is a model in patient involvement in Europe. For EPF, being part of the PCWP means being always up-to-date, having the opportunity to be involved and follow up the work on lay friendly information on medicines, patient safety and clinical trials, and supporting the inclusion of the patient’s perspective in medicines’ evaluation. EMA can lead the way for the future of healthcare, together with patients.”