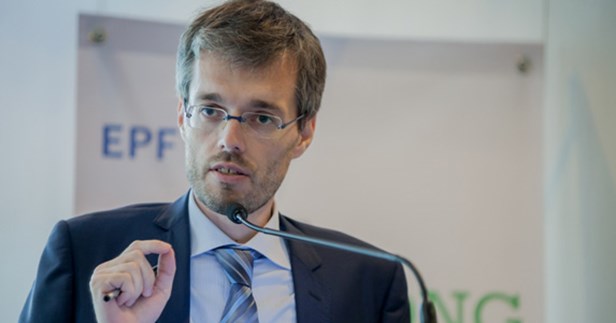 On the occasion of the EPF Annual General Meeting, Marco Greco was elected our new President for a mandate of two years.

On the 22nd and 23rd of March, more than forty EPF members came together in Brussels to participate in our Annual General Meeting. The two-day event despite the extremely sad and tragic circumstances, was a key milestone for EPF with the election of a new President and renewal of the Board.

Marco Greco from Italy was elected by the EPF Board Members as President of EPF. He has been chairman of the European Federation of Crohn’s and Ulcerative Colitis Associations (EFCCA) since 2008. He was the founder of the EFCCA Youth Group, and its leader from 2003 till 2007.

A lawyer by background and a partner in a law firm, Mr Greco has a long experience of active involvement in patient advocacy movements in Italy. A chronic patient himself, Mr Greco pledges to see the genuine expertise of patient leaders acknowledged by other stakeholders. As he stated in his first speech as President of EPF: “I was first diagnosed when I was 17, and I became a patient advocate the day after. Because this is not what I do, this is what I am. What we all are. Patients”.

The meeting gave the opportunity to say goodbye and thank you to Anders Olauson, who has been active in EPF since the conception of the association, in 2003. Chairing EPF from 2005, Mr Olauson was instrumental in creating and supporting the patient movement at the European level. Passing on the baton to Marco Greco, Mr Olauson said “I am proud to be part of the European patient community and to have helped EPF to become the major voice for patients in Europe –alone one can achieve very little, together so much”. In recognition of his time and involvement within EPF, Anders Olauson was awarded the title of Honorary President of EPF by the assembly.

The meeting also saw the election of new faces in the Board of EPF! Juan Fuertes from Pulmonary Hypertension Europe, and Michal Rataj from the European Alliance of Neuromuscular Disorders Associations were elected as new Board members for a two-year mandate. Three candidates saw their mandates renewed, with Brian West (European Aids Treatment Group , EATG)) being elected Vice-President of EPF, Dominik Tomek (AOPP, Slovakian Patients’ Coalition) and Susanna Palkonnen (European Federation of Allergies and Airways Diseases  Association,EFA) as ordinary Board members.