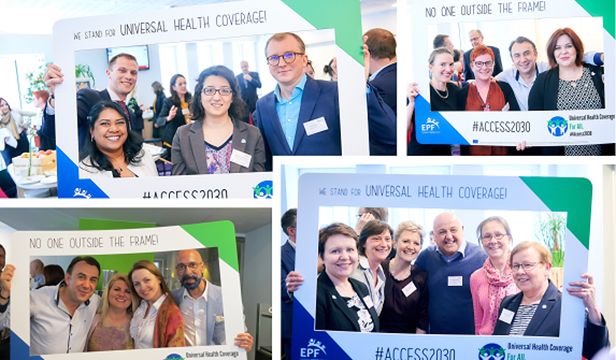 Earlier this year, EPF launched a patient-led campaign on access to healthcare with the objective to define concrete actions to achieve the United Nations Sustainable Development Goal of Universal Health Coverage for All by 2030. With the campaign now entering its second half, let’s take a look at the engagement of stakeholders so far!

As citizens and patients of Europe, we all have good reasons to support Universal Health Coverage. A broad range of supporters, representing different stakeholders, joined the campaign in the last few months, supporting our actions:

EPF members are the driving force of this campaign. They have been involved at different levels, and showed great support to the EPF Secretariat in the dissemination of campaign messages and material, with the help of the Campaign Toolkit we developed. Our members play a crucial role in raising awareness about barriers to access across countries and diseases, and in mobilising their own members to actively get involved and contribute to the policy work with ideas and testimonials. Some of the European umbrella organisations have also used the momentum to develop and give fresh impetus or extra visibility to their own work on access by producing interesting reports and statements, such as the survey on access to dementia care by Alzheimer Europe; or the work done by EUFAMI on access to services in mental health.

To increase our chance to have a real and meaningful impact on the EU health policy, we identified five high-level MEPs to champion the campaign. Besides being the public figures of the campaign, their engagement is crucial in putting access at the centre of the EU political debate and in bringing a strong and decisive political support to our work and activities.

To create a united and stronger voice for our claims, EPF decided to join forces with organisations advocating for Universal Health Coverage, or working on one of the campaign 5 areas. This cooperation has been particularly fruitful in the area of non-discrimination, for which – together with organisations such as PICUM, Soleterre and RaisFundación – we are drafting some solid policy recommendations.

The involvement of individual patients, healthcare professionals, and other health stakeholders has also been very positive. They have been crucial in echoing our campaign among their communities and networks, and many of them have added their voice to our call for Universal Access to Healthcare by signing our online petition.

Everyone has a place in this campaign, and can contribute in different ways depending on their availability and resources. If you would like to get involved, you can find several ideas in the engagement toolkit, or sign the online petition – so we can present it to decision makers proving a substantial societal weight. Do not hesitate to also provide your input to feed the policy roadmap with recommendations that we will present at the end of the campaign. In this regard, if you have had a positive or negative experience accessing healthcare services in your country, please share it with us!

Join our supporters and help us achieve this ambitious goal! And remember: we can make Universal Health Coverage For All a reality by 2030 if we work together!