Youth Group: Advocacy and Fundraising During a Pandemic 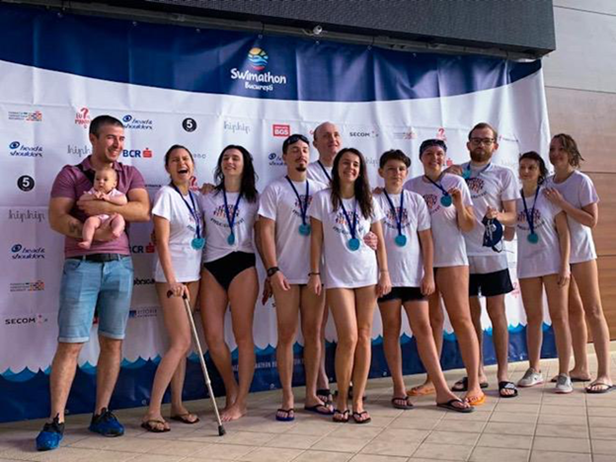 MS Kids Retreat is a project developed by APAN Romania (Association of Patients with Neurodegenerative Diseases) that aims to have annual meetings for children diagnosed with multiple sclerosis (MS) in Romania. The project gathers the children – the main actors, their parents, pediatric neurologists, psychologists, and other adults living with multiple sclerosis. One of the ideas in this project is to create a community for these children who face a life changing diagnosis so early.

The reason I decided to get involved is the fact that multiple sclerosis diagnosed in children is considered a rare disease and I believe not enough focus is given on the way which they are diagnosed and how they cope with it. With multiple sclerosis on the table, the child feels alone and stigmatized. We, as humans in general, are biologically programmed to live in tribes. We need to have the feeling of belongingness, and this is what we are trying to create for kids with MS.

Swimathon Bucharest is the platform we are using to raise money and awareness for this project. It is one of the longest platforms that aim to change the community we are living in by inviting people to get involved for projects relevant for them and swim for it. Since this year was still not completely clear how much freedom we will have due to Covid-19, it has been decided to make it go beyond swimming. Basically, we were invited to be as creative as possible.

The motto this year is: “The biggest wave of good starts with you!”. My idea was to create “waves” – be it in the form of running, hiking, cycling or actually swimming, but combine it also with a part of awareness on multiple sclerosis in general and particular to children, as I noticed that many people do not actually know what multiple sclerosis is. My “waves” consisted mostly in running and I started on May 30th which is World Multiple Sclerosis Day. It will end at the end of June with the swimmer’s team meeting at the pool where we will make actual waves.

Thus, my call to action is: Let’s raise these children with equal chances of turning into mentally healthy young adults. Let’s make sure they know they are in control of their lives and that the “sky is not the limit” applies for them as well.