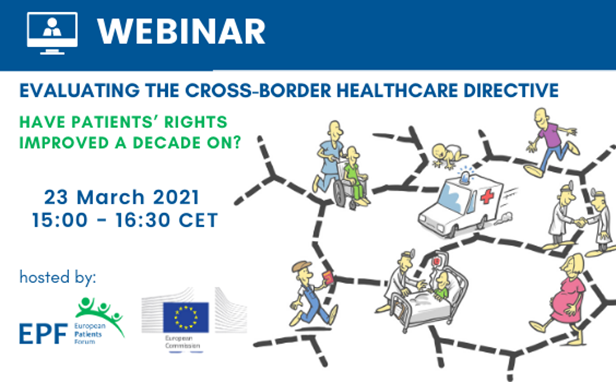 It has been ten years since the Cross-Border Healthcare Directive (Directive 2011/24/EU) was adopted after a lengthy legislative process. Officially entered into force two years later in October 2013, this Directive enables EU citizens to access healthcare in any EU country other than their own and be reimbursed for care abroad by their home country. For patients with chronic conditions, it sets the conditions under which they may travel to another EU country to receive medical care and reimbursement.

Though the final Directive was less ambitious than EPF’s vision, it did mark a milestone for European patients. It created a legal framework for the patient’s right to seek healthcare in another Member State and to be reimbursed. It also provided a legal basis for enhanced European cooperation in key areas of healthcare – including quality and safety, Health Technology Assessment and eHealth, and rare diseases. Still, whether the Directive would actually make treatment abroad more accessible to patients with chronic diseases remained unclear.

The Directive is currently under evaluation, reason for which EPF, in collaboration with the European Commission, organised and online webinar to facilitate engagement with EPF members and the patient community. This webinar took place virtually on Tuesday, 23rd March 2021, and it was attended by over 50 patient advocates from a wide range of EU countries.

Participants had a chance to learn more about the next steps of the evaluation process, including the upcoming European Commission’s public consultation with stakeholders, ranging from May to July 2021. This will be followed by targeted and tailored consultation activities with stakeholders, including workshops, interviews and questionnaires. By mid-November 2021, a draft evaluation report will be sent to the European Council and the European Parliament for review and approval.

The webinar started with an introduction by Kaisa Immonen, EPF's Director of Policy, who gave a summary the EPF's Work on the Directive since 2012. This includes a series of conferences with patient communities and National Contact Points (NCPs), including patients’ recommendations to the latter. She concluded by saying that patient's rationale for seeking healthcare abroad is based on "need" as much as it is on "choice".

Then, the webinar continued with Caroline Hager (Team Leader Cross-Border Healthcare &Tobacco Control, DG Sante). She explained how, the Cross-Border Healthcare Directive can be seen as a ground-breaking advancement in healthcare policy at the EU level. She identified the two legal roots to cross-border healthcare: the social security schemes coordination (Regulation 883/2004) and the Directive on patients’ rights in cross-border healthcare (Directive 2011/24/EU). Since its implementation, the Directive has been harmonising minimum patient's right across EU countries and fostering cooperation between the Member States.

At the moment in which this webinar took place, the European Commission was currently evaluating the implementation of the Directive, paying attention to its provision and implementation (which fall on the EU Member States). The ongoing evaluation is looking at the extent to which the Directive’s objectives have been met, the extent to which it is relevant for meeting patients’ needs in cross-border healthcare, its efficiency and efficacy in practice, and the administrative burdens and barriers that its implementation faces. Outside of the above-mention evaluation’s scope are the provisions on e-Health and the cooperation on the Health Technology Assessment.

Then, Martin Dorazil (Deputy Head of Unit, Digital Health & health & European Reference Networks, DG Sante) took the floor to provide further input on the European Reference Networks (ERNs). These provide virtual remote consultations and clinical data on patients’ cases, advise and exchanges expertise for diagnosis and treatment, research on rare diseases, provide Knowledge generation, and foster education and professional training. Their legal basis is Article 12 of Directive 2011/24 – which states that the European Commission shall support the Member States in the development of the ERNs. So far, there are 24 ERNs in different rare-disease areas. As part of the evaluation of the Cross-Border Healthcare Directive, the European Commission will look at how effective the Directive has been at supporting the ERNs, the ERNs’ impact on research, and many others.

If you could not attend the webinar or if you want to re-watch the discussion, you can access the event recording and the presentation here.

If you want to know more about EPF's work on Cross-Border Healthcare, or on the above-mentioned webinar, please reach out to the Policy Team at policy@eu-patient.eu.