EPF Annual General Meeting: a new Board and a new President! 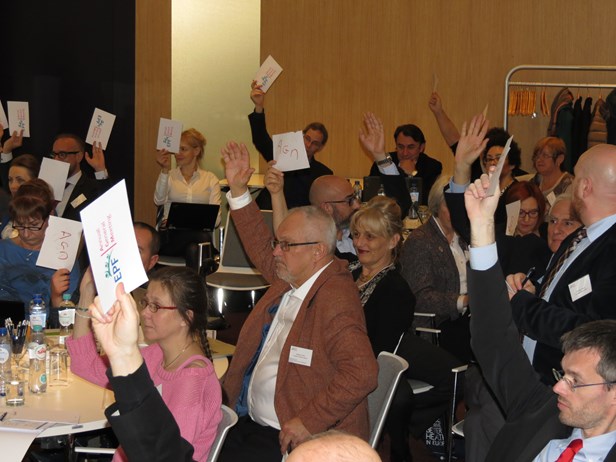 On the 22nd and 23rd of March, around forty EPF members came together in Brussels to participate in our Annual General Meeting. The two-day event saw the election of a new President, the renewal of the Board and the confirmation of four new EPF members.

Marco Greco from the organisation EFCCA (European Federation of Crohn's and Colitis Associations) was elected by the EPF Board Members as President of EPF. An Italian national, Marco has been Chairman of the European Federation of Crohn’s and Ulcerative Colitis Associations (EFCCA) since 2008. He has also been the founder of the EFCCA Youth Group, and its leader from 2003 till 2007.

The meeting also gave the opportunity to say goodbye and thank you to Anders Olauson, who has been active in EPF since the conception of the association, in 2003. Chairing EPF since 2005, Mr Olauson was instrumental in creating and supporting the patient movement at the European level. In recognition of his time and involvement within EPF, Anders Olauson was awarded the title of Honorary President of EPF by the assembly.

A new Board for EPF

The meeting also saw the election of new Board members. Juan Fuertes from Pulmonary Hypertension Europe, and Michal Rataj from the European Alliance of Neuromuscular Disorders Associations were elected as new Board members for a two-year mandate.

To view the full Board of EPF, please check: http://www.eu-patient.eu/About-EPF/whoweare/board/

Finally, four organisations were confirmed as members of EPF by the General Assembly:

The EPF membership now consists of 67 members, strengthening the patient movement and its representativeness at the EU level!